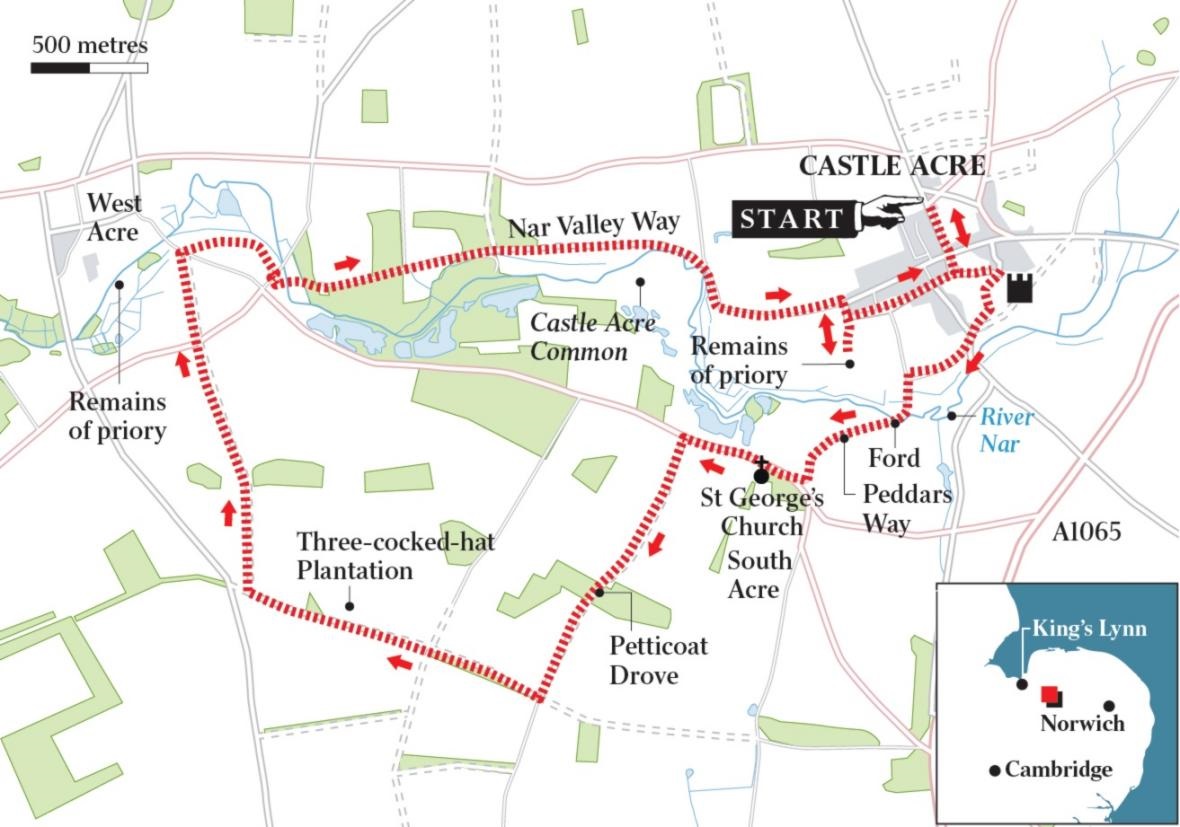 Reproduced from an article in The Times on 25th July 2020 by Christpher Sommerville.

Just behind the houses and the big, flint-built Bailey Gate in Castle Acre’s main street, a great castle fortified in the 12th century by the de Warenne family stands in ruins on its 100ft mound, still strikingly severe and dramatic.

We walked the ramparts and descended into the ditches, picturing those desperate days of civil war between 1135 and 1153 when Stephen of Blois and the Empress Matilda contested the English crown and only the strongest stronghold gave security.

The ancient thoroughfare that brought friend and foe to the walls of Castle Acre, a route known nowadays as Peddars Way, had been in use for millennia when the de Warennes held sway here. We followed the old road out of the village to where the River Nar dimpled over shallows of flint and sand across a wide ford.

At South Acre, St George’s Church stood by the roadside. Inside we admired the ornate, 20ft-tall medieval font cover and the intricately carved foliage of the old rood screen. In the north chapel Sir Edward Barkham (lord mayor of London, 1621-22) lay in stiffly splendid effigy on a tomb chest beside his wife, Jane, while on the floor near by the 14th-century brass likenesses of Sir John and Lady Katherine Harsick lay fondly holding hands.

Beyond South Acre the sandy lane of Petticoat Drove climbed out of the shallow Nar Valley through gently undulating corn and beet fields. A rising wind whistled in the tops of ash and sycamore as we passed Three-cocked-hat Plantation. Dropping down a long grassy lane towards the River Nar again, we caught glimpses through the hedges of tall blocks of flint masonry, the remnants of West Acre’s Augustinian priory.

The Nar Valley Way led homewards along duckboard trails, over squelchy ground and on past the juicy reedbeds and marsh ground of Castle Acre Common. This valley was nicknamed the Holy Land for its many religious houses, and on the outskirts of Castle Acre we found the Cluniac priory established by William de Warenne at about the same time as the castle.

Guarding the tight cluster of monastic buildings stood the tall west front of the abbey church, superbly built and engineered, sculpted with a row of stone heads more pagan than Christian, enigmatically staring down as they have done for almost 1,000 years.